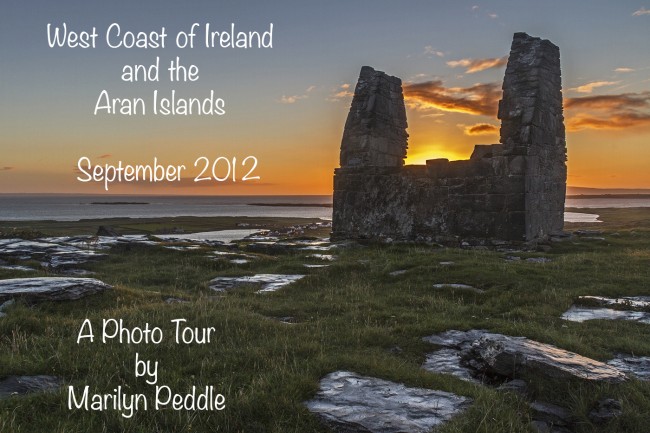 In September 2012 I took a trip, which was for me one of a lifetime to the West Coast of Ireland and the Aran Islands. I know to some it’s not very far but to me it was an adventure. I have to confess I didn’t know much of that part of Ireland or Ireland itself so to have the chance to visit and on a Photography Tour with the Irish photographer, Brian Cooney was a real plus; he took us to places we probably would have never have found. For sometime now I have wanted to record the trip not only with photos but also a written record of the journey, something to look back in years to come and revisit in spirit at least. I wrote some notes of the trip when I returned so I have them to refer to and of course all the pictures I took while I was away.

The tour was from Sunday 16th September to Saturday 22nd so rather than write it up in one blog I shall split it into a number of pages, to help make it easier to look through and for me to write, rather than one long epistle!

I left Dorset early on Sunday morning, Rod, my husband took me to Poole to catch a National coach to Heathrow. I had to catch a flight in the afternoon to Shannon airport. the flight was only and hour, it was all the travelling at both ends that took the time as always.

I was picked up at the airport by Brian and we had an hour and half journey to our hotel in Doolin. A modern contemporary building very comfortable and very good food. One of the memories will be all the amazing food I had on the trip. Some really quality meals which I thoroughly enjoyed! I just had time to drop my case off in my room and then meet the other members of the group; there were four photographers and two non-photographing spouses, a nice small group who I got to know well through the week.

I would soon realise how the trip was going to go a whirlwind of moving and visiting many places. I didn’t ever empty my case, I just grabbed what I needed for the day and that was usually top, trousers, waterproofs and coat and of course walking boots and I more or less lived in them! Anyway we were off to our first shoot that evening, I had to find my tripod in my case, my camera bag was my hand luggage from the flight and we were off.

Our first visit was to one of Ireland’s iconic landscapes, The Cliffs of Moher, standing 214m (702 feet) at their highest point.

By the time we got there the sun was going down, the weather was a little changeable but the views were amazing looking over to the Atlantic, next stop America!

O’Briens tower was built in 1835 by Cornelius O’ Brien, a local landowner. He saw the potential for tourism and had the tower built at the highest point of the cliffs for 19th century visitors as a viewing area.

The pace was not going to slacken and it was an early start  for the next location. We crept out of the hotel around 5.30am to drive to Fanore beach, County Clare. Situated on the edge of The Burren, a National park,  which we would see more of later in the week. Fanore  featured in the comedy series Father Ted a number of times.

When we arrived the wind was blowing and there were storms around, it was pretty cold. We set up our tripods to take images before the dawn  and I took some views of the beach and rocks. Because it was still quite dark the shutter speed was slow giving a misty, milky look to the sea.

After a while many of the group decided that they would prefer to go back to the hotel as they were getting cold and wet, Brian the leader, one of the group Penny and myself decided stick it out and see if there was going to be a sunrise. I wasn’t going to miss out!  I’m so glad I did as soon after the group went there was a beautiful wild sunrise, the colours and clouds were amazing it was worth waiting for.

Once the dawn came the light soon changed and we returned for a well earned breakfast to the hotel, which was very welcome.

We would then get ready for our next adventure, three days in the Aran Islands…

It’s been a while since I posted on here, one reason we have been decorating, a major revamp of my ‘workroom’ upstairs removing a large built in cupboard and laying a new floor with all that ensues and then we both went down with a horrible bug and we have been poorly for about three…

On Good Friday, 15th April Rod’s niece came to visit and we went down to RSPB Arne to see what was about. For the last few visits we haven’t seen much at all but our visit that day was very exciting. It was a lovely day and although cold in the morning it stayed sunny…

On the 15th April I met friend Ange early in the morning and headed for Blandford. We wanted to walk the river bank in a hope of seeing something interesting. It wasn’t too busy but we did have some interesting views of a few birds. I noticed something on a dead tree in the river…

On Saturday 2nd April I decided to take Tilly up Okeford Hill, a very cold frosty morning around -2°C but a lovely dawn if a little hazy over the Blackmore Vale, so not much good for any landscape images. I walked around the large field that goes down to Bonsley Common and pond and then…

I put our night camera out now the weather is getting better. I’ve been feeding Hedgehogs more or less all winter, I think they have only been missing for a couple of weeks so I’ve always had food and water out just in case. My first video was a poor Hedgehog dragging something on her…