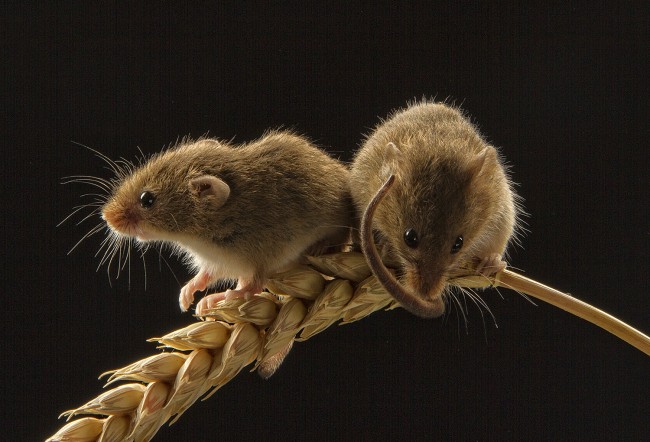 Every third Monday in the month we have a Studio night in Blandford Camera club, where we set up lights in the clubhouse and take pictures of various things like still life, a model, smoke to name a few but on Monday 17th the night was spent taking pictures of Harvest Mice and Frogs. We had a talk sometime ago on a Tuesday club night which included a gentleman called Pete Wieldon and his talk included images of the animals he kept and bred at his home.

He was asked if he would consider bringing some of his animals to our Studio night and he said yes. So our night was spent trying to take these little creatures. He brought along his own equipment, he had setups which enabled little sets to be made but in a tray with overhanging sides where the mice couldn’t get out, heaven only knows the havoc they would have caused if they escaped! We also had our own studio lights which had soft boxes on, setup with a green background. On the other with Pete’s lighting there was a black background with back lighting and the club’s reflective umbrella as well to give a different effect.

He also had all sorts of props that we could set up for our photography, wheat, teasels, poppy head twigs and even a nest made of straw so there was plenty of sets we could make.

What fun we had the mice were quite happy to be placed on all the props and they were such little stars, they didn’t get fed up and just gave us lots of endearing images. The frogs were just as good, the little Red eyed Tree Frog was happy on his branch as long as he got a spray of water now and again.


I had a really good evening and a few nice images as I’m sure everyone else there did, much better than a human model!