No workshops for a while but then two come along in quick succession! The Bath one was planned but this Jurassic coast one on 10th December was a bonus. The workshop was with  Anthony Blake photography once again, he had someone cancel and asked me if I was interested, I was pleased to go. We set off early in the morning to get down to Corfe Castle before dawn although the advantage of wintertime is that the dawn is very much later so we didn’t leave Child Okeford until 6am.

We had to climb up West Hill, Corfe Castle to get ready for the sunrise, where Tony took us it was fairly steep and slippy but we  all made it safely and managed to get ready for sunrise. We all used graduated filters for the sky as the differential in sky and land was going to be tricky for the camera to interpret. We managed to get some images of the sunrise and then walked down to the base of the hill to take some silhouette images with the sun behind the castle. As always on these workshops planning ahead can mean the weather is not in your favour but we didn’t do too badly as the days in between had been grey and miserable and although there are pictures to be had in those conditions it’s not what we really want along the Jurassic coast.

As always click on an image for a bigger picture!

Once the sun was up we headed off to Swanage for the next part of the workshop, always an interesting place with the old pier and the Victorian pier. Before we started taking photos we had a very welcome stop in a cafe on the seafront and had a breakfast to warm ourselves up then on to the business of image making. It was clear day and the Needles, Isle of White were visible behind the old pier.

Our first stop was the old pier an iconic picture that has been taken many times but worth practicing on using filters to smooth out the water. During the summer there are temporary landing platforms in the way as the divers use the main pier to leave in their boats, so in the winter it’s easier to take an image without all the clutter. It gave me a chance to try out my 10 stop filter, this makes the exposure much longer and this is what smooths out the water.

Then we spent some time on the Victorian pier taking a number of images, I turned some of them into monochrome to bring out the textures and clouds. 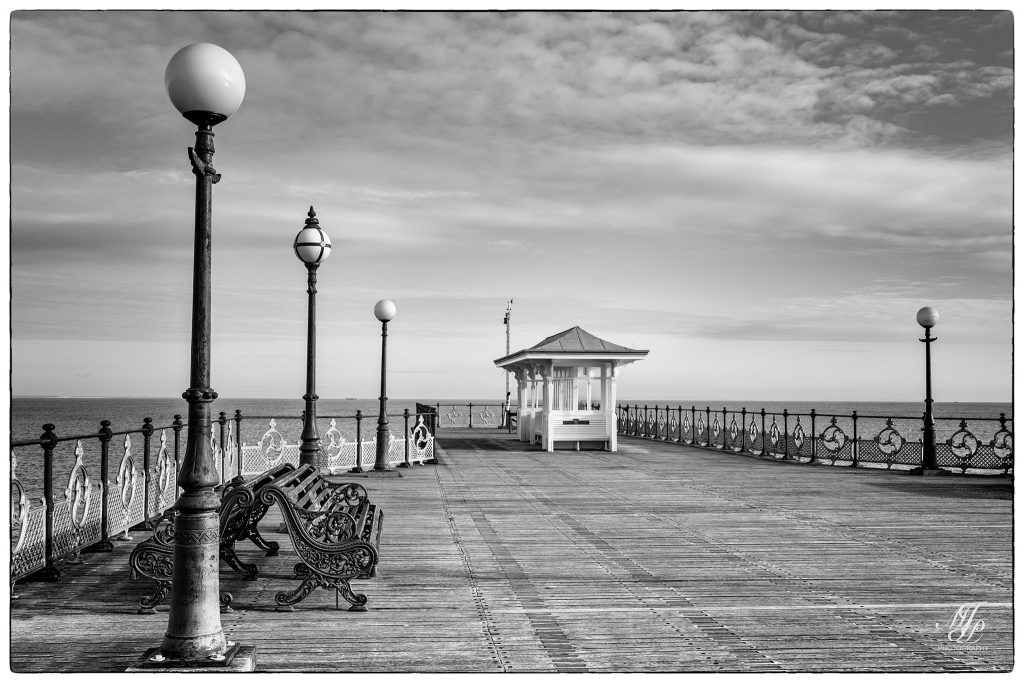 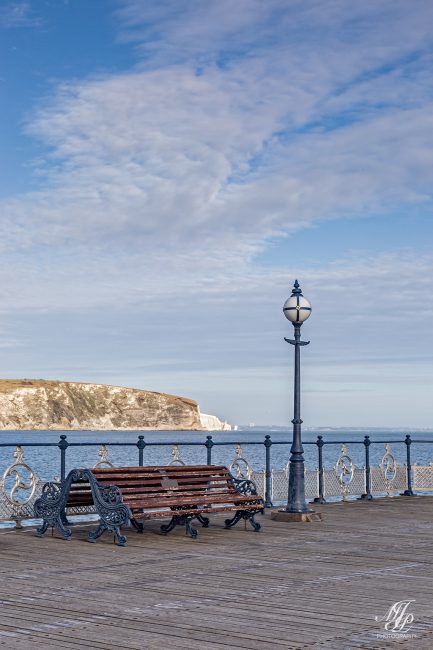 As we were on the pier we noticed across the bay to Pevril Point that the wave action in the wind looked interesting so that was our next stop. At first we were a little disappointed as there were a group learning coasteering but a after a while it was good to have a little human interest in the image with the waves coming over the top of them, I was glad I was on dry land!

By the time we had finished at Pevril Point it was time for some lunch which we enjoyed in the fresh air overlooking the bay, a little chilly but OK. Before we left Swanage we walked a long the seafront taking a few images. 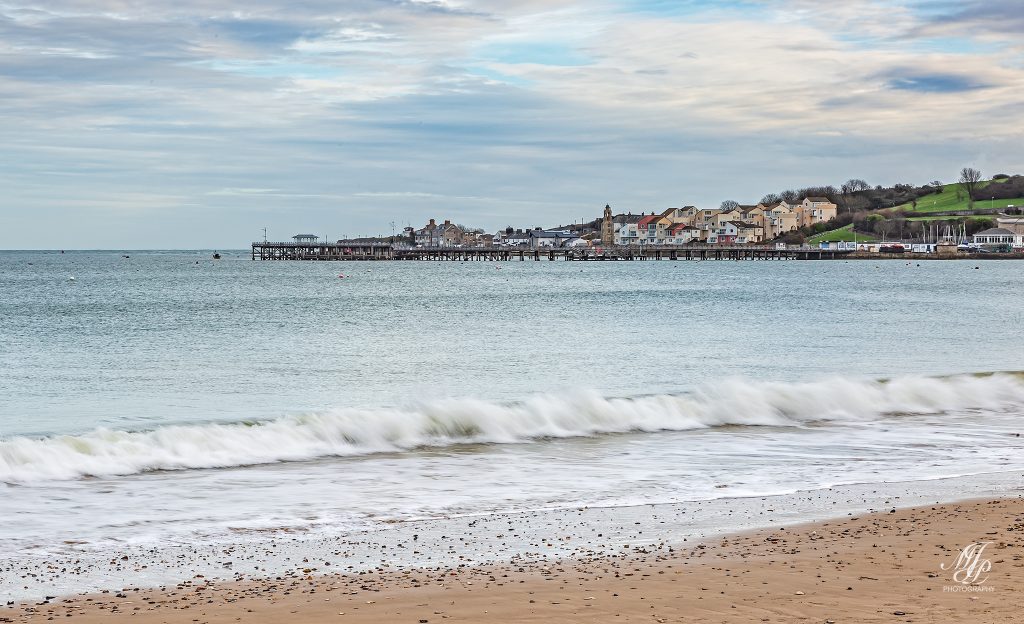 Our final stop was to be Kimmeridge for the sunset it wasn’t looking too good as there was cloud moving in but I’m pleased to say the light changed as we were lined up on the ledges. The tide was out exposing the ledges but they were very slippery so we had to move around with caution, we or our camera wouldn’t bounce if we went down on the rocks.

I said Kimmeridge was our final stop but when we made our way back to the Corfe Castle Car Park the light was giving way to dusk and the floodlights were on lighting up the castle so we all couldn’t resist one last stop to take a picture or two.

Another great day and although the weather and lighting were not always as we hope for there was still images to get out of the day. A long but fruitful day!

On Sunday 9th January it was dry and cloudy, well what I could see of it when I went out in the dark. I drove to the Trailway carpark in Shillingstone, I wasn’t being lazy as the river was nearly in flood and I probably couldn’t have made it across the bridges to Bere Marsh….

Another trip out on Friday 7th January, we decided not to go to far as the weather wasn’t that special and quite chilly. There were showers forecast for the morning so we decided to head up the Salisbury road onto the Cranborne Chase. We weren’t sure what we were going to see but it’s usually…

When the holidays were over we decided to take a trip down the Arne, we had heard that there had been sightings of a White Tailed Eagle around Arne and Poole Harbour and we both wanted to see one. It is one from the reintroduction project by the Roy Dennis foundation on the Isle of White….

I thought my Ham Wall trip on Boxing Day would be my last post of 2021, the weather still wasn’t good after, but the last day of December cleared for a little while so I decided to go for a local walk, just for an hour to see what was about. I didn’t spot very…

Rod and I usually stay at home holidays and weekends and venture out during the week when most people are at work or school, but Rod’s niece, Elaine contacted us and asked if we would like to meet her at RSPB Ham Wall on Boxing Day, we thought why not and if it was too…