As always with photography workshops you have to book well in advance and if it is going to be outside there is no control of the weather. I booked a workshop with Anthony Blake photography for Sunday 2nd December which was a walk round the city of Bath taking in the sights of this beautiful city and also the Christmas market which is on every year which gave us a chance to take some street scenes. Not my usual type of photography but I was looking forward to something different. The weather forecast all week was looking pretty grim, plenty of rain about and the Sunday didn’t disappoint it was pouring with rain and continued for most of the day! But landscape photographers are hardy souls and we made the most of what we had.

The first images we took was a challenge from Tony he gave us all a different photography exercise to have an attempt at. My challenge was to take Intentional Camera Movement or ICM images an artistic form where as you take a picture you move the camera which can produce an interesting image.

The image below was one I took and with the movement it shows the day it was with the rain lashing through the image. There are a few more ICM pictures on my Bath Gallery page Bath Image Gallery

We then walked around the town taking street scenes. There was plenty to see plus little cobbled streets and the rain made reflections on the cobbles and added to the image.

We then made our way to towards the river Avon and Pultney Bridge to try a few landscape images. Being so wet and dull with flat lighting I decided that converting them to monochrome was the best option in post production.

Then we walked up to Bath Circus to take architectural images not easy as there are always cars and people in the way and it was challenging to find suitable compositions.

The next stop was the Royal Crescent, it was getting towards dusk by then and still wet and very dull but there were images to be had.

As the light was finally giving way to dark we headed back into the centre of Bath where it was still busy with shoppers and the market and we spent a couple of hours wandering around taking pictures of the city and the Christmas street scenes. There was so much to see, the stalls the side streets the floodlit abbey it was wonderful, full of opportunities to take pictures.

Our final stop was an island in the middle of the road near the station to take our final street scenes. Taking the Christmas decorations and the light trails from the vehicles on the road.

I have to say I really enjoyed the day and I think the rain helped, the reflections from the wet roads and pavements helped in the picture taking, it was a challenge at times keeping the camera dry and the rain off the lens.

One final picture, the last one I took looking back at the Rugby pitch from where we were taking the light trails, the floodlights were on after a match and I could see the rain lashing down in front of them so I took a quick picture which I thought summed up the day and the weather, but it didn’t matter it was one of the best workshops I have been on and I got some pictures! 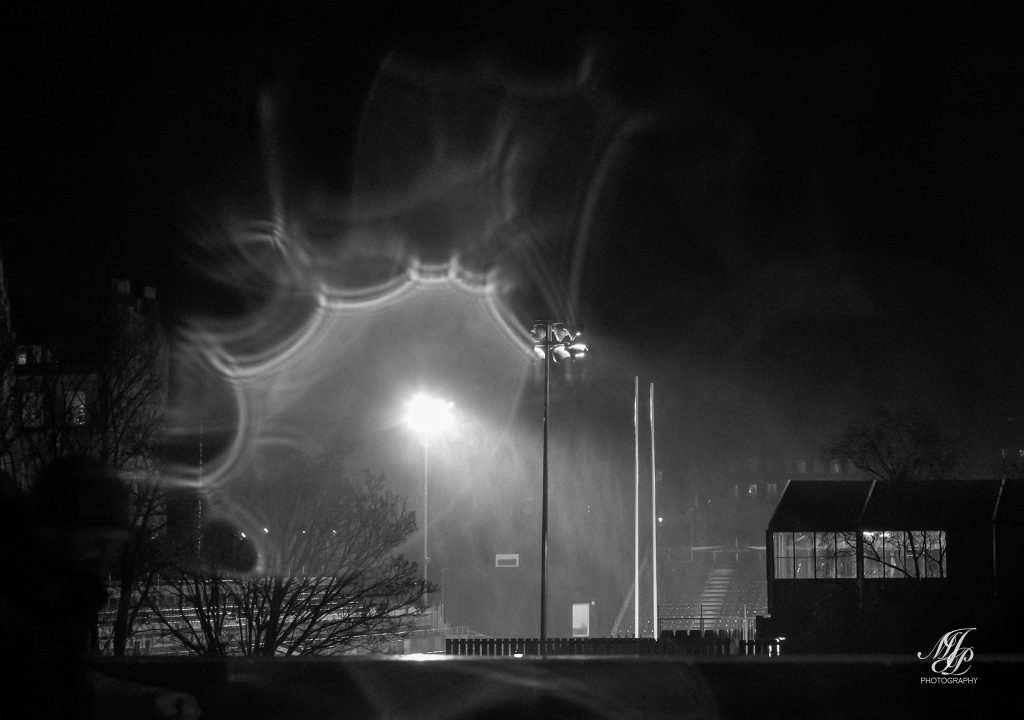 It was a long but very enjoyable day and it challenged me to take images I have never tried before. I have a gallery of many the images I took on the workshop Bath Image Gallery

It’s been a while since I posted on here, one reason we have been decorating, a major revamp of my ‘workroom’ upstairs removing a large built in cupboard and laying a new floor with all that ensues and then we both went down with a horrible bug and we have been poorly for about three…

On Good Friday, 15th April Rod’s niece came to visit and we went down to RSPB Arne to see what was about. For the last few visits we haven’t seen much at all but our visit that day was very exciting. It was a lovely day and although cold in the morning it stayed sunny…

On the 15th April I met friend Ange early in the morning and headed for Blandford. We wanted to walk the river bank in a hope of seeing something interesting. It wasn’t too busy but we did have some interesting views of a few birds. I noticed something on a dead tree in the river…

On Saturday 2nd April I decided to take Tilly up Okeford Hill, a very cold frosty morning around -2°C but a lovely dawn if a little hazy over the Blackmore Vale, so not much good for any landscape images. I walked around the large field that goes down to Bonsley Common and pond and then…

I put our night camera out now the weather is getting better. I’ve been feeding Hedgehogs more or less all winter, I think they have only been missing for a couple of weeks so I’ve always had food and water out just in case. My first video was a poor Hedgehog dragging something on her…